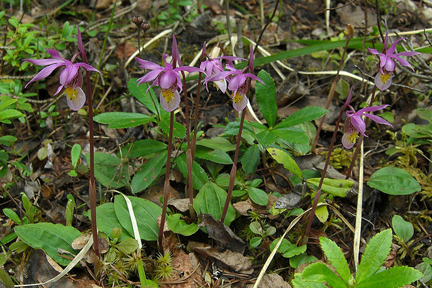 During a recent walk through John Dean Provincial Park, Nature Boy encountered his first Calypso orchid of the year.

He was so excited, he called the rest of us back to crowd around and join the admiration parade. He dusted off his annual Calypso orchid lecture: blah, blah, blah, and so on and so forth.

I’d long thought this little orchid with its spiky purple flower was named for the Greek nymph Calypso, whose youth, beauty and — ahem — other charms waylaid wayward Greek hero Odysseus for umpteen years on his way homeward after the siege of Troy.

The orchid’s other names similarly hint at ability to beguile and enchant. Venus lady’s slipper, fairy slipper… the names for this wee flower imply a big reputation.

Continue reading this article at the Victoria Times Colonist….