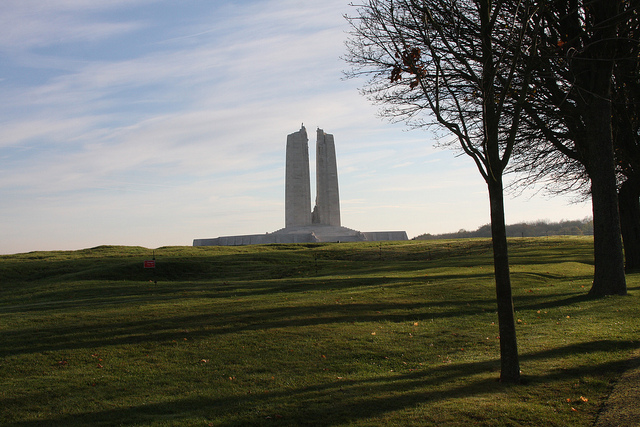 The biplanes had a rendez-vous with time. They are flying in formation over Vimy Ridge today, as part of the ceremonies taking place there. The ceremonies mark the centennial of the Battle of Vimy Ridge.

On April 9, 1917, at 5:30 A.M., France time, the four divisions of the Canadian Expeditionary Force launched a meticulously and long-planned attack on German fortifications along the ridge. It was the first time the four divisions had fought together.

By day’s end, all but one of the divisions had secured their objectives. The entire ridge came under Canadian control three days later.

The Canadians triumphed where the French army had failed repeatedly over the previous two years. But the cost was high. Almost 3,560 Canadian soldiers died and 7,004 were wounded.

After the war, France gave Canada 100 hectares on the ridge to create a battlefield park to commemorate Canada’s contributions during the war. The Canadian National Vimy Memorial includes the ridgetop cenotaph that lists Canadians who disappeared during the war’s battles, parkland, parking lots, military cemeteries, and a small section of preserved trenches and tunnels.

Weather reports this past week indicated sun and warm temperatures for today’s ceremony, providing no weather-related reason to ground the biplanes from Comox. April 9, 1917, however, dawned amidst a snowstorm. Surprise, poor visibility, and a well-executed barrage from Allied field artillery on their side, the Canadians slipped across the few metres separating Allied and Germans lines, and entered the first German trenches unchallenged.

While snow prevented the limited air support that was possible in 1917, in the days and weeks before the battle, Britain’s Royal Flying Corps would have been in the air all along the line. By that year, both sides sent men aloft regularly to gather information. Pilots and observers spied on enemy troop movements, identified enemy defences, and pinpointed enemy gun locations. They took photographs with big clunky cameras that used glass plates instead of film, dodging enemy planes along the way.

It was awkward, cold and dangerous work, but the images captured were vital to planning subsequent battles and defences. The aerial photos provided the most up-to-date information about battlefield terrain and risks.

Planning for the Vimy Ridge battle depended on them.

The pilots flying the biplanes above the ridge today face considerably less risk.

Today, of course, we don’t need a biplane or an observation balloon to peer at Vimy Ridge. We don’t even need to travel the tiny railway built to ferry ammunition and stores towards the front line. I paid a virtual visit to the site while writing this article.

From my kitchen table—eight times zones to the west of my objective—I lurched via Google maps along the tree-lined route des Canadiens up and at the top of the ridge. It brought back memories of my own pilgrimage to Vimy some years ago.

Today’s ridgetop looks nothing like the wasteland shown in photographs taken 100 years ago. The photos—black and white, sepia-tinged, and of varying quality—show churned earth, shell holes and steep-sided trenches. They tell of the tiny railway and of muddy, slippery roads. Some document emplacements of German heavy guns and Allied field guns. Some show gun crews. Some show infantry. Some show bodies.

A mix of open woodlands and meadows line the road and grow in open parkland throughout the memorial today.

Yet, beneath the trees, the grass-covered ground shows the scars of old trenches and pits and mounds of long-ago bomb craters. Even today, wartime tunnels, trenches, craters, and unexploded munitions honeycomb the site. Most of the grounds remain off-limits, deemed too unsafe to walk on.

One hundred years have passed since the Battle of Vimy Ridge. The sun shines. The skies are safe for biplanes. Even in this post-9/11 world, visitors are unlikely to be blasted by bombs, peppered by machined gun fire, sliced open by shrapnel, or targeted by snipers.

But beneath their feet, the detritus of war reminds us that the threat of violence remains.

A version of this editorial appears in the Victoria Times Colonist, April 9, 2017.