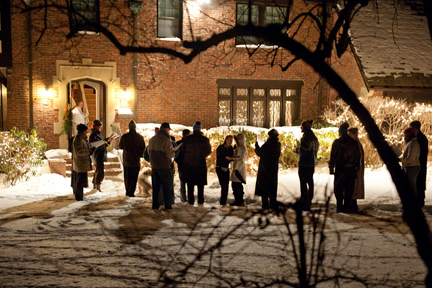 “This qualifies as a barbaric cultural practice,” Nature Boy said the other day when we were grocery shopping. “I’m sure I’m not the only person who feels deep and lasting psychological distress at being subjected to holiday carols non-stop from November 1 through December.”

He paused to survey the candy-cane display. “Wasn’t there supposed to be a hotline I could report this to?”

Neurologists have already determined that music primes our reactions. That the Academy of Motion Pictures of America awards Oscars to best original scores and sound editing underscores the role music plays in playing on our emotions.

Holiday songs are mostly major-key, four-four-time pieces that are cheerful, hummable and have an annoying way of inserting themselves into our inner song tracks. Having the chirpy tunes play endlessly inside our heads can seem, as Nature Boy suggests, a kind of auditory water torture.

They may remind us long after we leave the shopping mall of the season and its many expectations— when our lives are already burdened with unreasonable standards. They may pressure us to be cheery and bright—even if our lives better reflect the season’s dark, stormy weather. The song’s messages of community and celebration deny the loneliness and mental stresses that exists amid the cheer and parties. The underlying messages of certainty and ease belie the current condition of the economy and job market, and the financial precariousness many Canadians face.

Who knows, these tunes may even play a hand in compelling us to throw caution to the wind, imbibe more of the spirits of the season, eat more, and spend more than we should. In short, they may emphasize marketers’ invitation to temporarily enter the realm of denial and postpone dealing with the consequences.

They act as counterpoint to some reports regarding modern popular music. When psychologists from the University of Toronto surveyed Billboard’s year-end chart-toppers from half of the years since 1965—about 1,000 songs in all—they identified a marked shift towards sad- or ambivalent-sounding music. They documented increasing use of minor keys and slow tempos—characteristics that contribute to a piece’s seeming sadness. Musicians are also increasingly mixing happy and sad elements—combining, for example, a perky major key with a funereal tempo, or manic keys and tempos with chilling lyrics.

The Echo Nest, a U.S.-based music and data platform, confirmed the trend, but noted that when it analysed its collection of 17 million songs written between 1960 and 2013, the shift was slight.

Carols come to us from centuries past, when life was harder and more precarious. As such, you would think the tunes might reflect hard times. However, according to musician and ironically self-styled “musical genius” Chilly Gonzales, the form carols take expresses not their times’ social conditions, but past rulers’ desire to maintain status quo. Church and state long enjoyed privileges, ease and wealth beyond the reach of those they ruled—and they wanted to keep it that way. Songs in major keys and bright tempos, says Gonzales, reinforce the view that everything is awesome—serving as musical bread and circuses to distract the masses.

Music in minor keys, however, has always been the domain of minor-ities. It expresses the uncertainties of their experience.

Gonzales transposed a medley of traditional holiday carols. Dashing through the snow on a one-horse open sleigh becomes a desperate journey across a frozen wasteland. The little drummer boy beats his drum—ta-rum-ta-tum-tum… possibly on the way to war. At any moment, the silent night may be pierced with the sound of breaking glass and the door being kicked in.

Most Canadians face less dramatic uncertainties. However, marginalized communities and individuals in Canada may relate to the implied lack of safety. This year’s federal election played on some Canadians’ deep-seated mistrust and dislike of foreign-looking/sounding/dressing strangers. The rhetoric and fearmongering raised the spectre of desperate journeys and helplessness in the face of war, violence and intolerance, with no safe harbour or candle in the window at the end.

Canadians rejected that vision at the polls, but it caused the proponent party’s pre-election prospects to rise.

For that alone, we should contemplate the messages of carols in minor keys this season.

A version of this editorial appears in the December 13 Victoria Times Colonist.