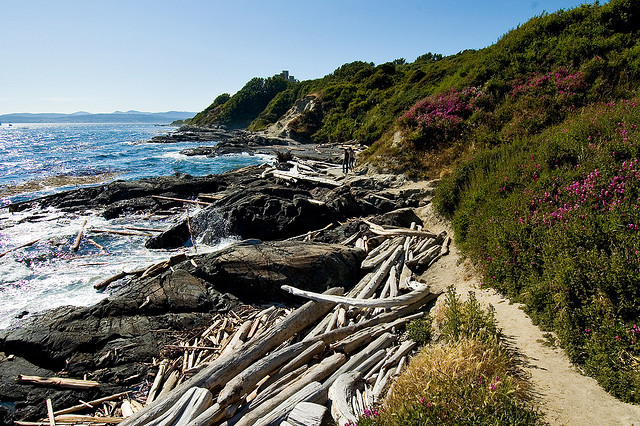 We live in a part of the world many other people envy us for. We have ocean, mountains, beach, forests, a pretty darn awesome year-round climate for a place just south of the 49th parallel, and a number of big-town services and restaurants for what is, in many ways, a small town.

And on one of those perfect summer or fall or spring or even winter days, you just have to stop and say to yourself, “Seriously, why do I live in such a hell-hole? Let’s just stop the clock, and the moon and the stars and sun, and hold this moment. Forever.”

Alas, things change. The neighbours’ cute kids have grown up—they no watch in fascination and envy every time you mow your lawn. (They used to like machines. Now they like only their smart phones.) The bus schedule and route that was so handy for your out-of-the-way office has been discontinued. Your doctor has retired, and you haven’t yet found a replacement.

Even these glorious surroundings are changing. More brambles and Daphne laureola grow in the nearby park. Your favourite trail that once meandered through the woods is now wide and trampled enough for a two-lane highway. That old house and farm at the end of the street have made way for a new subdivision.

And that is at the rate of human change. Some change happens slowly, at geologic timescales, so gradual we notice it only when an oldtimer or a historic photograph brings it to our attention. Take the spectacular Dallas Road parks, for example.

The seashore along the parks is not a museum exhibit. It changes constantly, with weather and time. Geologists estimate that waves and weather shave about 12 centimetres from the cliff-top areas every year. Over a period of about a century, about 30 metres of land fell into the ocean east of Finlayson Point, by Beacon Hill, bringing the cliff edge ever closer to the homes facing Dallas Road. At one time, residents faced the real threat of parts of the historic Ross Bay Cemetery being swept away with the tides.

Many of the pathways and staircases informally trampled and formally constructed into the cliffs and along the water by Dallas Road have changed the pattern of rainwater run-off and weakened sections of the cliffs. The removal of logs from beaches during the late-19th and early 20th centuries permitted waves to pound unimpeded at the bases of the bluffs, eating away at soft sedimentary rocks and scouring durable igneous rocks. As well, for decades last century, local kids had great fun digging dens into the soft rock of the cliffs by Clover Point, which encouraged slumping and small landslides. Three mineshafts sunk near Finlayson Point in the 19th-Century likely did little to stabilize the cliffs there. Seawalls built to protect the shoreline served to weaken the cliffs instead and caused the beaches to deteriorate further.

Gorse and other unwelcoming shrubs were planted along some parts of the cliffs to discourage erosion by wayward access and help bind the dirt together.

As late as the 2000s, the city was trying to stop geology and forestall further erosion and loss of beaches. It dumped six tonnes of gravel on the beach below Holland Point to stabilize it and to maintain it as much as possible as we prefer to remember it. However, wave and currents carried much of rock further along the coast. Even now, the rehabilitated beach areas comprise only gravel—a sterile environment for such a biologically productive place.

Thousands of us use this incredible parkland resource everyday; a thousand or so of us live along it. Our desire to capture our environment and freeze it forevermore in its current state may be a very human impulse, but it is neither realistic nor doable. In the battle against unrelenting natural processes like tides, storms, erosion, and even changing climate and sealevel, the best we can do is to ensure we don’t make things worse.

It’s true—100 or even 200 years from now, our waterfront parklands may be washed away, and the buffer between homes and cliff edge may become disconcertingly narrow.

But we live in an ever-changing world, not a museum.

Seize the day, and enjoy this brief moment in geological time.

A version of this editorial appeared in the August 23, 2015, issue of the Victoria Times Colonist.