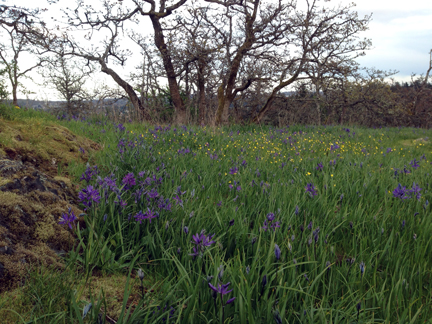 When I first moved here, one winter many years ago, a long-time area resident gifted me with a list of some of her favourite outdoor spaces.

She rattled off the names of parks and trails that she enjoyed. Then she let slip the name of a small hilltop Saanich park.

“For spring wildflowers,” she said, adding, as if no explanation were needed, “It’s original Garry oak meadow.”

The following April, I found my way there. The day was damp and blustery. Watery-looking sunlight filtered through evergreens towering along the path. Not far into the woods, the sound of traffic from the busy roadway behind dropped off.

I climbed the hill and stepped out of the trees. Blue camas, buttercups and spring gold carpeted the ground. A few gnarly, naked oaks stood guard. Beyond some rocky outcrops, I found a patch of fawn lilies. A few satin flowers lingered on.

“So this is a Garry oak meadow.”

In the years since, the small farms that once bordered the park have bred single-families dwellings and townhouses instead of sheep and horses. Ivy, blackberry, Daphne laureola and other invasive plants choke the lower forested slopes, while other non-native plants invade the south-facing meadows.

But the greatest threat to this quiet, little jewel remains ill defined and uncertain, as it does to special places everywhere. Scientists predict that, over the next decades, the seasons here will feature greater extremes. Hotter, longer, drier summers will anchor the year, with frequent, intense storms punctuating the other seasons. How changing climate and its attendant baggage will affect Garry oaks and their attendant plants, microbes, insects and other critters remain unknown. Whether this Garry oak meadow will survive also remains uncertain….

Read the rest of this editorial at the Victoria Times Colonist.