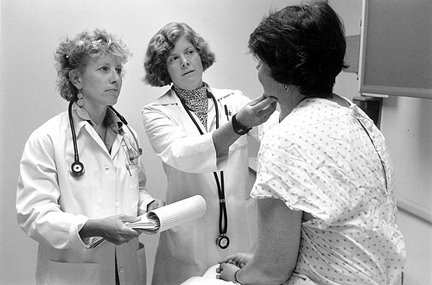 I recently asked Nature Boy when he had last seen a doctor.

He answered, “Not since the final season of House M.D.”

Other British Columbians share a similar rate of exposure to medical practice. Most of us are more familiar with characters who take medical license on TV than with doctors licensed by the College of Physicians and Surgeons of B.C.

Television physicians, after all, make weekly house calls to our living rooms. That practice has largely disappeared in the real world.

Furthermore, when one series retires, another takes its place. Medical dramas are too lucrative for producers to keep viewers waiting. Victoria lacks such reassuring succession-coverage as its family doctors retire. At least two local GPs who retired last year could not find replacements.

Of course, with B.C.’s complicated medical fee schedule and the business expenses that independent GPs must cover, running a family practice generates far less income than TV medical dramas do. Last year’s retiring GPs advertised across Canada, offered to give away their practices—even offered to pay replacements to take over their practices—and still got no takers.

That issue never seems to feature on the television series.

No, the problem for viewers rests on which of the TV medical series to favour. Or whether TV-doctor hopping provides greater satisfaction than loyalty to a single show.

Older TV dramas—pre-1980s—featured kindly, Caucasian, male physicians, like Marcus Welby or Dr. Kildare, who knew everything and could solve any medical case. Modern TV docs come packaged with personal problems and personality problems. Yet, despite these character differences, similarities remain across the decades.

Few of the shows portray family physicians. Instead, TV doctors usually work in emergency or critical care in hospitals, or failing that, in specialized private practice (Nip/Tuck). They also prescribe endless tests and medications. They experience unbelievable success rates with CPR. They (almost always) discover the problem-of-the-day—it’s never lupus—and save the patient.

And, despite being specialists, they perform the work of nurses, psychiatrists, anaesthesiologists and untold other healthcare providers.

Those who study TV medical dramas professionally say the portrayal of medical practice gives rise to unrealistic expectations among real-world patients. We expect all the tests and the insight of Dr. Gregory House when we bring our boo-boos to the family doc. We think CPR will save lives without fail. We want pills, even when no pill can treat our illness.

Television’s sidelining of other healthcare workers may cause other far-reaching effects. It may, for example, influence career choices. If the TV drama ER, which started airing in 1994, prompted a subsequent increase in medical-school applicants, the absence of strong TV roles for nurses, family doctors, and other practitioners may correspondingly serve to de-market those professions.

Most med-school graduates, after all, seek to practice as specialists, not as generalists—despite the well-known shortage in generalists.

In fact, prime-time marginalization may reinforce the unwritten attitudes and practices that medical students and residents absorb as they train to become doctors. A recent study by University of Ottawa physicians uncovered consistent bad-mouthing of certain medical professions, with teaching doctors and specialists disparaging family medicine and psychiatry the most. A 2012 survey by Queen’s University uncovered similar biases and behaviours.

While the practical jokes, bullying, prejudices, and ill-treatment of junior staff reported in the studies sound like life imitating House M.D., that they occur in Canada’s teaching hospitals must sway students’ choices of profession.

Perhaps it will replace House M.D. as Nature Boy’s TV medical show of choice. Perhaps it will prompt him to make an appointment with his GP to avoid a starring role in the show himself.

A version of this editorial appears in the November 29, 2015, Victoria Times Colonist.