Two years on, and we’re finding not even rural France remains frozen in time. C’est dommage, mais, ça, c’est la vie. The commune of Mirepoix is extracting value from its forests this past summer: stands throughout the area have been harvested, and the logs are piled alongside the highways awaiting trucks with Big Claws to cart them away. The village of Camon has ripped out its poplar plantations and replaced them with vines.

The bakery in Chalabre has closed and is for sale. This is of particular sadness to us, as it was a regular morning croissant stop for us last time we were in the area and were en route to points south and east. Now the tabac—the French version of the convenience store—next door has taken on the role of dépôt boulangerie to serve the needs of the community, but, really, it just ain’t the same as bread fresh from the oven.

Further, our favourite baker in Mirepoix, Cédric Diant, across the laneway from le Relai hôtel, has timed his annual vacation to coincide with our vacation. We have to wait almost half of our holiday to experience once again his fabulous pain d’autan (traditional bread), pastries and chocolates. Fortunately, the “Sweet Sin” (la Péché Mignonne) bakery on the other side of the ring road around the city’s historic centre is open. Not quite as amazing, but amply adequate. We particularly enjoy their photo album of the reconstruction of Saint-Basil’s cathédral au chocolat: fait du 70 kg du chocolat, 120 heures du travail, et one tonne de la passion (made with 70 kg of chocolate, 120 hours of work, and one tonne of passion). 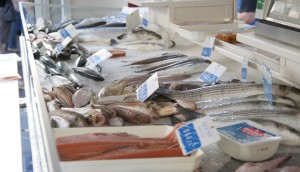 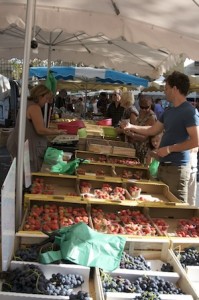 Sadly, the musical-instrument man no longer sells at the Sunday Esparaza market, to Gaston’s dismay. No further access to croaking frog-drums or wooden-clatter birdsong makers. And the herb-and-spice seller at the Monday Mirepoix market has also moved on. In fact, finding herbes de Provence has become something of a challenge.

And the cheese-and-saucisson seller with the blond highlights at the weekly Esperaza/Mirepoix markets has passed the torch—at least temporarily—to a young Basque woman.

Of further tristesse, is the old, old bouvier de Flandres dog owned by Madame Vènes at our favourite Minervoix winery was hit by a car last December, and no longer welcomes us or anyone with a wag of the tail and a flop-down nearby, followed shortly thereafter by the appearance of madame. “He was my doorbell, my claxon,” she told me. “Even before anybody drove up or rang the bell to take a tasting or anybody knew a customer had arrived, he would search me out and bark to alert me that someone was coming.”

Now madame has to make do with a young South Korean woman interning at the winery for the next six months to guard the office and let her know when customers have arrived to sample the fabulous nectar produced by the estate. In 2005, Massamier-la mignarde produced the “best wine in the world” in the Syrah–grenache–mourvedre category, according to the vignerons of France. Having sampled that vintage the last time we were in the area, I must say, it was very fine.