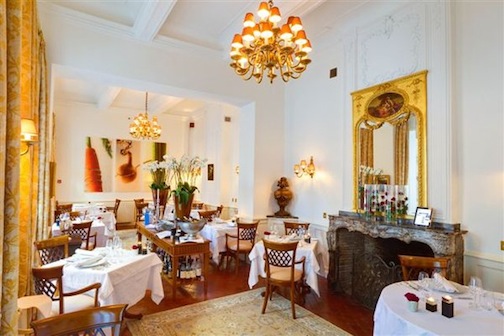 I’ve frequently enjoyed soups and sauces made from mirepoix stock, but this was the first time I’d had the actual mixture of chopped celery, carrots and onion that is called mirepoix explicitly showcased on my plate.

Gaston and I were enjoying the Friday fixed lunch at le Ciel d’Or, the restaurant at the Relais Royal hotel in Mirepoix, France. Chef Rogier van den Biggelaar, here in Mirepoix-the-town, clearly is proud of his position’s occupational, geographic and historical connections to mirepoix-the-food. The aromatic mixture, which forms the flavour base of many stocks, soups, stews and sauces, is named for Charles-Pierre-Gaston François de Lévis, duke of Lévis-Mirepoix, whose family had ruled the area since the 11th century. Mirepoix-the-lord employed the cook credited with establishing and codifying mirepoix-the-cooking-technique within the canon of French cuisine in the 18th century.

Our meal in present-day Mirepoix-the-town was both simple and simply delightful.

It started with a salad featuring a few leaves of crisp oak-leaf lettuce that cupped a generous spoonful of pink foam redolent of tomato roasted just long enough to concentrate the fruit’s sugars. Slices of vine-ripened cherry tomatoes, a drizzle of bright olive oil, and a lick of balsamic reduction lifted the dish into art, both visually and gastronomically.

But the main course was, of course, the main attraction. The menu provided just one offering: roast pork with brunoise.

Brunoise consists of a small-dice mirepoix cooked with diced ham or pork belly.

In other words, we were going to lunch on mirepoix in Mirepoix.

The chef had highlighted the natural flavours within the mirepoix, and as soon as the plates were brought into the dining room, the aromatics filled the high-ceilinged room. Steeped in a rich, savoury sauce made from the reduced juices of the pork and the vegetables, this mirepoix consisted of orange, and translucent green and golden flavour jewels that seduced the senses and silenced Gaston and I. The tiny cubes had cooked only briefly and remained satisfyingly firm in texture. This dish, so commonly relegated to the background of everyday cooking, was both revelatory and familiar, pleasantly astounding us with the fullness of its flavour on the one hand and soothing us with the comfort of an old friend on the other.

The four generous slices of roasted pork loin we were each served were tender, flavorful, and moist, with a thin, slightly chewy, slightly caramelized crust, and were perfectly set off by the brunoise.

We both would have been content if the meal had ended with this main course. Being a weekday in September, the restaurant was quiet. The staff allowed us time to sip our wine and appreciate the lingering taste-memories before presenting the sweet course—a trio of small taste treats that pleased the palate without burdening the belly. Gaston particularly enjoyed the berry smoothie that was served in a shot glass, while I appreciated the tiny tiramisu.

Coffee, of course, completed the meal.