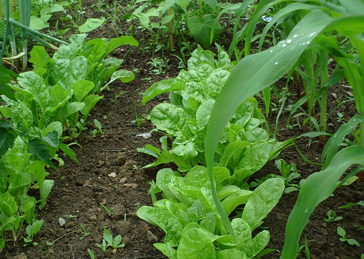 As a child of Depression-era children, I experienced the annual toil of backyard gardening early on. Mostly reluctantly, and only because the alternative to spending summer Saturday mornings outside among the lettuces, carrots and beans was spending that time scrubbing toilets and cleaning the weekly hairball out of the shower drains.

Despite the eloquent persuasiveness of that choice, no under-18s in the household at that time considered weeding a privilege.

Now, however, older, wiser and much busier, we each find ourselves spending time mucking around in the dirt to grow our own fodder. Our kitchen gardens range from year-round herbs for seasoning, to seasonal salad fixin’s, to more ambitious items like vegetables and fruit.

Just having the time to muck around is a treat.

It also helps that produce you produce tastes better. Even a little garden parsley and rosemary in soup creates freshness for the taste buds. Potatoes, peas, corn and carrots cooked and eaten within minutes of being picked exist in taste categories on their own.

There’s also the feeling of moral superiority and self satisfaction of getting the ultimate scoop on the 100-mile diet. Footprints from garden plot to soup pot: 20. Carbon footprint: Zero.

You can’t get much more local than that.

Read the rest of this editorial in the Victoria Times Colonist

2 thoughts on “New generation goes back to the garden”