Upon waking at la Maison des roses on our first day in St-Gély, about 20 minutes west of Bagnols-sur-Cèze in the south of France, we were up with the roosters. Before the roosters. And at about 9:00 A.M., right when the village was stirring, Gaston announced he was in need of a nap: jet lag was taking its toll.

Two hours later, he was awake and ready to walk the three kilometres through wood and vale into Gourdagues for groceries. But—ah!— it was Sunday: We managed to catch the bakery just before it closed, but were too late for the supermarket. Half the week had passed before we amassed ingredients for a green salad.

As Mrs. Plaskett said to Helen Sawyer Hogg on the subject of incessant afternoon-tea engagements in Victoria in the 1920s and 1930s: “It has quite simply ruined my digestion.”

France pretty much shuts down at noon on Sundays. This is, of course, the case any day of the week. At midi, which lasts from noon until 2:00 P.M. at least, the only creatures that stir in the country’s towns and villages are cats, lizards, and visitors such as ourselves who haven’t figured out the French daily rhythm. And, on Sundays in deep France, you often don’t even have the post-siesta opening hours to look forward to.

However, after about a week of getting it wrong, in Fanjeaux, a village perched on the north edge of the Sault plateau about 20 minutes from Mirepoix, we found a wee salon du thé serving through the prolonged lunch hour. It opened its doors across from the back door to the Dominican abbey. 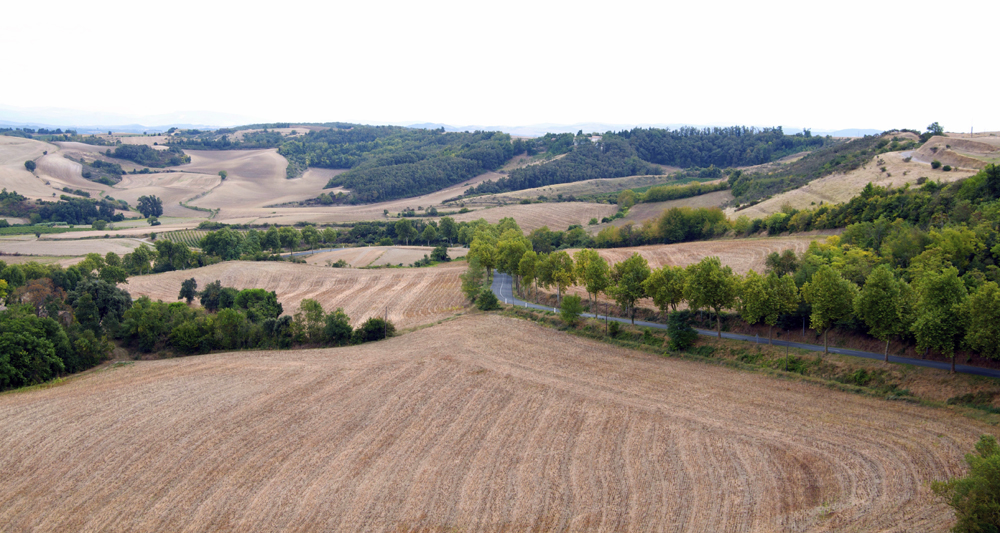 Defenders of the faith at Fanjeaux’s Dominican abbey would have literally overseen miles of countryside.
The church and abbey themselves were firmly closed until 3:00 P.M.; Fanjeaux is a pilgrim town, being not only one of the way stops along the route through France to the via Compostela but home also briefly to Saint-Dominic. Church and abbey offer the faithful hope for refreshment on Sunday afternoons.