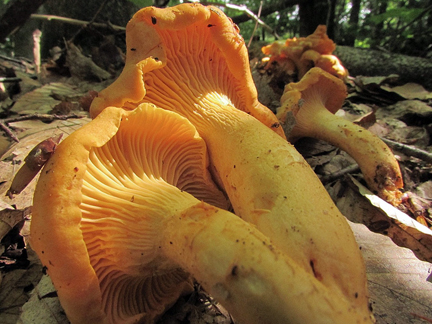 November 29—Celebrating a three-tined tribute to the stuff that makes gardens grow seems odd at this time of year. But Global Soil Week, punctuates the end of the U.N.’s International Year of Soils and ends in a trifecta with Saturday’s World Soil Day, relates as much to winter here as it does to places with growing seasons that span the turn of the year.

The chanterelles, pine mushrooms, morels, and other late-year treats are signposts of the complexity and mystery of our coastal soils.

This much we know about soil—we depend on it. To paraphrase the U.N. Food and Agricultural Organization’s website, soil makes possible food, feed, fuel and fibre production. It helps us manage water and prevent drought, and provides supports ecosystem and human wellbeing. Soil does so much for us.

This much we also prefer to overlook.

It’s just dirt, right? Sure, it’s tolerable in its place—in the flowerbeds, the fields and the forests. But when it strays from those dirt-y places into our houses, beneath our fingernails, or into our salad bowls, it’s “Out! Out!” If you want to clear a crowded room quickly, announce loudly that you’ve soiled your pants. Go ahead. Try it.

To paraphrase a line from current blockbuster The Martian—an information source with influence far greater than that of a fact-based U.N. webpage—even “Mars has soil.” Well, Mars has rocky and sandy soils, meaning it has those particular kinds of earth (and raising the linguistic conundrum: Is Mars’s dirt earth, or is it mars?). But not even Hollywood magic at its nerdiest makes mars a medium in which plants can grow unassisted. The movie’s title character must add his own night soil—a pungent combination of intestinally processed organic material and gut bacteria (see above, on how to clear a room quickly)—to the planet’s barren mineral mix. The humus increases the mixture’s ability to hold water and allows the fortuitous movie-potato crop to root, shoot and form tubers. Tada—viable, living soil.

This much we don’t know about soil —a whole lot. Soil is a loamy black box that scientists have only recently begun prizing open.

It was only in the 1990s, for instance, that the importance of soil fungi started becoming clear. Fungi, some of which fruit as mushrooms, create widespread webs through ecosystems. Their microscopic threads tie communities of plants together. These mycorrhizae feed on sugars the plants make and, in return, help the plants. Some mychorrhizae protect their hosts’ roots from disease. Some help plants access minerals and water both by extending the roots’ reach deep into and through the soil and by exponentially increasing the surface area the plants can draw on for water and mineral absorption.

Although some mycorrhizae take more from their plant buddies than they give, as a whole, the group is essential to plant and thus, ecosystem, health.

In the 1990s, scientists determined that, tonne-for-tonne, the Earth’s largest, oldest, longest-living organisms were mycorrhizal webs of fungal filaments.

More recently, University of British Columbia researchers discovered that mychorrhizae share resources between plants. The networks shuttle nutrients from well-established trees to young trees, helping seedlings and saplings until they can stand their ground. The fungal connections share nutrients between plants of different species—between conifer trees and lady’s slipper orchids, for example—and from dying plants to healthy neighbours. To Snowberry, I bequeath 20 per cent of my phosphorous, and to Bearberry, 10 per cent of my nitrogen. They turn forests, grasslands and wetlands into socialist communities.

But wait, this underground Internet also transmits instant plant messages. The fungal filaments broadcast alerts across the wood-wide web when insects or pathogens attack one of its plants. The “save yourselves” warnings sent by beleaguered hosts may trigger defensive action by remaining plants—increasing sap flow, for example, to flush out burrowing beetles or nasty butt-rots.

So, this week around the world, soil and the underground networks of organisms that make it work get their due. Let us salute with soiled hands (but not pants) the soils that support us.

A version of this editorial was published in the November 29 edition of the Victoria Times Colonist.