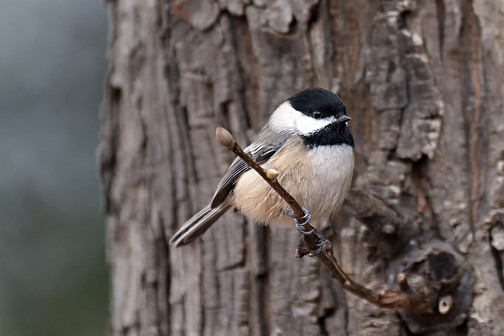 The robin chicks outside my window disappeared last night. At about 4:00 a.m., much rustling of shrubberies and great squawkings by Ma Robin occurred. When I poked my head outside, the three nearly grown babies had vanished.

For three weeks, the daily charting of the chicks’ progress was a household highlight. Their sudden, tragic loss has taken us all aback, bringing forth long faces and even a sniff or two. Last night, they no doubt became breakfast for an intrepid raccoon.

While Ma Robin built her nest, brooded eggs and stuffed bugs into gaping young beaks, our neighbours on the mainland elected Vancouver’s newest winged poster child. More than 700,000 people voted in the five-week-long popularity contest for Official City Bird of 2015. More than one-third of voters backed the Black-capped Chickadee over five other contenders.

Several things about the contest astonish me….