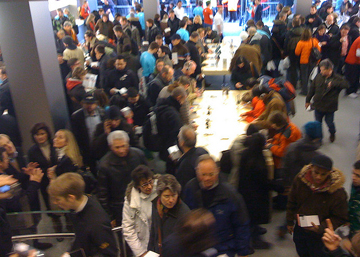 A relative remarked to me recently about a particular couple of our mutual acquaintance.

“They both have good jobs. They have a beautiful house. They have no kids. They travel. They drive expensive cars. They heat their garage throughout the winter. Oh, and you should see all the gadgets and electronics they have—all top of the line. Those two are rolling in money.”

Of course, as we know, a person may have all the trappings of a good income, and still have little unspoken-for cash. They may, instead, be house poor, gadget rich, and rolling in debt.

The cost of living on the south coast and the amount of debt many British Columbians have taken on have increased dramatically in the last two decades. We’re hampered by escalating real estate prices, rising food prices and, now, increasing retail prices. Salaries and wages haven’t kept up.

A recent survey for BMO reported that, on average, British Columbians carried almost $100,000 in household debt in 2014, up more than $20,000 from 2013. About 44 per cent of British Columbia households are mortgaged, and about one in six B.C. households carry persistent credit card debt—one of the punishingly expensive types of debt. Any financial advisor or person with any financial know-how recommends moving debt from credit cards to other forms of debt that carry lower interest rates.

It’s so easy to overlook the opportunity to save as much as 100 per cent when we don’t buy anything at all.

As well, many retailers have adopted the U.S.’s Black Friday and Cyber Monday tradition to launch the holiday shopping season during the otherwise unremarkable last weekend of November in Canada. They offer deals to entice and discounts to tempt consumers to toss budgets aside. Months ago, the Prognosticators of Retail predicted that, once again, high-tech gadgets were to be the most in-demand goods sought by North American shoppers, in person and online, during the 2015 holiday season. Beginning in September, all the online Black Friday forecast sites—the opinion makers and swayers (all U.S. based)—listed electronics as first out of the gate for holiday purchases, yet again, this year.

Yet, even as this Black Friday’s engines revved up and millions of point-of-sale systems around the continent stood ready to transfer hundreds of millions of dollars between millions of accounts, Statistics Canada released its September retail numbers. For the first time since spring, sales in Canada fell. Overall revenues decreased 0.5 per cent to $43.3-billion. However, while revenues were down, the volume of actual sales remained steady. And, compared to last year, sales in September rose in all but three categories—less sharply than in 2014, but still an increase.

The categories that did not rise include electronics and appliance stores—down 1.5 per cent in revenues this September compared to last. Were the Black Friday forecasters off base?

With prices rising and the dollar falling, Canada’s retail analysts recently predicted a “drawn-out, margin-squeezing, profit-shaking competitive battle” for consumers’ wallets this season. Such competition certainly won’t benefit retailers, but consumers may do well—if they keep their cool and hold out for deeper discounts.

Of course the winter holiday season prompts a lot of impulse buying. The newest HDTVs, fitness wristbands, and other gizmos can be pretty tempting for gadget geeks. And those committed to That Fruit Company’s cult of cool may feel driven to own the recently released smart phone, thinking not of boring things like credit card balances, but of “me, myself and iphone.”

The recipe for instant gratification is simple. Take a brief moment of in-the-moment thinking, and add a dose of denial—a characteristic that rarely includes self-denial.

Then provide an easy way to pay that comes with a built-in delay.

A version of this editorial was published in the December 6 edition of the Victoria Times Colonist.